Home » About » History of the Cornell Mathematics Department » About Ernst Ritter

From New York we received the sad news, that our member Ernst Ritter died there of typhus. He got his habilitation in Göttingen a year ago and had received a job offer from Cornell University in Ithaca. It was a research position which was supposed help Cornell to catch up other famous American universities where mathematics was developing rapidly and he gladly accepted this job. With his clarity and his extended mathematical knowledge he seemed to be particularly well suited to this task. But it should come differently. Ritter was not feeling well, when he started his journey to the United States 4 weeks ago; due to his strong constitution he paid no attention to this. Immediately upon arrival in New York he was admitted to the Government Hospital on Ellis Island, where he then passed away, on the new continent, surrounded by all the care which his American mathematical friends could muster.

Ernst Ritter was born in Waltershausen (Thüringen) on January 9,1867; starting in 5th grade he attended the gymnasium in Gotha where he graduated in spring 1885. He continued his studies for 2 years in Jena and after that for 4 years in Göttingen. In fall 1890 he obtained his Staatsexamen (teacher’s license) and, in spring 1891, his doctorate in mathematics, He started in fall 1891 the two years of practical teacher training, which everyone in Prussia has to do, in Cassel and then continued in Frankfurt. In fall 1893, he returned to Göttingen as an assistant in the mathematics department and at the end of summer 1894 he obtained his "habilitation". 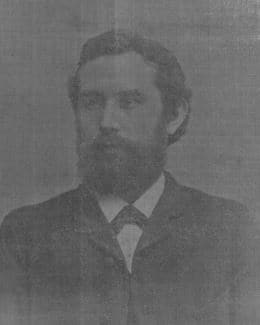 Apart from an article which discusses the movements of 2 particles according to Weber’s law and which was published in Schlömilch's Zeitschrift 3, his research concerns the theory of functions in one complex variable. I would like to mention here the 3 long articles in Mathematische Annalen volumes 41, 44 and 45, which will be followed by a forth article in volume 47. In these Ritter developed the foundations of function theory, His point of view is similar to the one which I suggested earlier, but he develops this theory in great depth. Without doubt his work is a great advance in the theory of functions on Riemann surfaces. I want to mention here just his use of homogenous variables, multiplicative forms and the continuity of functions under continuous change of the Riemannian surface and from his as yet unpublished article the general theorems about linear differential equations in a Riemannian class.

The spirit of strength and clarity, which one finds in these articles, is characteristic of Ritter. This could be observed earlier in his life. I have been told, that Ritter was always the best student in school and that he passed brilliantly all his exams at the university.

May he rest in peace .

Now, in my search for an understanding of the Riemann-Roch theorem, I have been looking at the references in the footnotes of Weyl's book (Die Idee der Riemannschen Fläche/The Concept of a Riemann Surface). There, on pages 136 and 137 (of the English edition) there is a reference to one E. Ritter who in 1894 was one of the first who, except for one relatively minor flaw, gave a proof of the Riemann-Roch theorem even for so-called fractional divisors. And later on in Weyl's book, in a footnote to page 147, this E. Ritter is even credited with formulating an extension of the entire Riemann-Roch theorem from system of differentials and functions that are univalent on the closed Riemann surfaces to such differentials and functions that are defined on the covering space of the Riemann surface, but are reproduced by the elements of the Poincaré monodromy group by a fixed multiplicative character of the group. And Weyl adds that in a later paper in 1896 (Math. Annalen, vol. 47), E. Ritter even further generalizes this to solutions of certain types of differential equations on the Riemann surface.

This sounded to me like the work of a very good mathematician, and I wondered why I had not heard from Ritter otherwise. So, one day I decided to look up the last quoted paper, and I had a surprise. The very last sentence of the paper announces a continuation, but there is a sad footnote by the editor attached, stating that, alas, there will be no such continuation. The author, Dr. Ernst Ritter, had accepted a call to Cornell University at Ithaca, but on the way to Ithaca, in New York, he succumbed to a typhus attack, on September 23, 1895. Also, the footnote announced a detailed obituary in the Jahresbericht der Deutschen Mathematiker Vereinigung.

This obituary was done by F. Klein, and is, oddly enough, dated September 25, 1895. It made me doubly unhappy for Cornell and the U.S.A. in general, for having missed out on such a gifted mathematician. Ritter had been born in January 9, 1867, and thus was only 28 ½ years old when he died. He had become a Privatdozent at Göttingen only two terms before receiving the call from Cornell. It was meant to be a big, purely scientific position by which Cornell wanted to become aligned with other mathematically forward-striding great American universities. Klein added that at sailing time Ritter did not feel well, but having a robust constitution ignored it. Immediately on arrival he was taken to the Government hospital at Ellis Island, where he passed away, surrounded with all the care which friendly American mathematicians could show him. I have been unhappy for American mathematics since.