Brightly colored crocheted pieces – part teaching tool, part artwork – spread across tables in the Mathematics Library, welcoming alumni and their families to a talk with Daina Taimina about her signature method of tactile exploration of hyperbolic geometry.

Her presentation during Reunion weekend introduced the release of the second edition of her book, “Crocheting Adventures With Hyperbolic Planes: Tactile Mathematics, Art and Craft for All to Explore.” 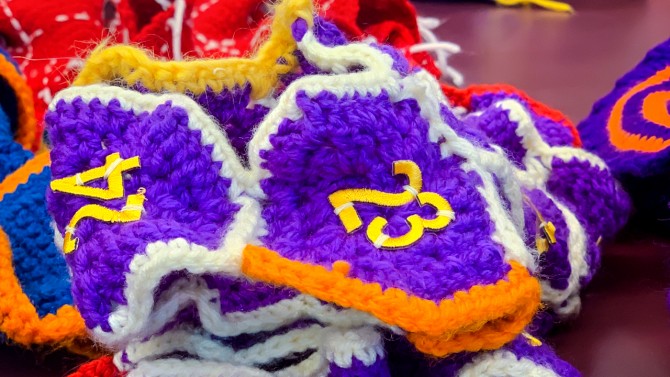 Taimina invented the crocheting technique in 1997 as a teaching tool, and it is used in many high school and college geometry classrooms. Since 2005, Taimina’s crocheted hyperbolic planes have been in some 30 invited exhibits and several solo shows around the world – including the Smithsonian Institution.

Numerous artists have created works based on Taimina’s hyperbolic crochet. Irish musician Donal Donahoe composed “Hyperbolic Guitar” – “an attempt to capture the exponential expanse of hyperbolic space in the rhythm of music,” he said.

Taimina’s work has inspired collaborative projects in Italy, United Kingdom, Finland and Latvia, as well as the international Hyperbolic Crochet Coral Reef project (the “Hyperbolic” was eventually dropped as the project shifted focus to environmental rather than mathematical concerns). The project was organized by science writer Margaret Wertheim, who learned of hyperbolic crochet from a 2001 article about Taimina in New Scientist.

The crocheted mathematics has had far-reaching and sometimes unexpected impacts on people. This is described in a new chapter in the second edition, “Hyperbolic crochet goes viral.” Taimina writes: “Hyperbolic crochet has flown around the world like wind-blown seeds and has sprouted up in unexpected areas that are growing in number like the stitches in a crocheted model.”

In addition to the new chapter, Taimina has updated the sections on applications of hyperbolic geometry and historical strands of geometry, and responded to the suggestions of readers to include patterns in the appendix with step-by-step instructions and pictures. The new edition also includes more photos.

The first edition received the Euler Book Prize from the Mathematical Association of America, which noted that the book is “unlike any book on hyperbolic geometry previously written, and it is in a different universe from any book on crochet previously written. But, when you look at it, the idea makes such perfect sense that it seems inevitable.”

Taimina describes her 20 years with crocheted hyperbolic planes as “an amazing creative journey” – but one she now carries on alone since the death of her husband, professor emeritus of mathematics David Wilson Henderson, in December.

“All my work was supported and inspired by David Henderson, whom I miss immensely,” said Taimina. “Thinking that my work keeps his vision of geometry alive helps keep me going now.”

Linda B. Glaser is a writer for the College of Arts and Sciences.